Ozone: noun \’ō,zōn\: a colorless gas with a pungent odor and powerful oxidizing properties, formed from oxygen by electrical discharges or ultraviolet light. It differs from normal oxygen (O2) in having three atoms in its molecule (O3). 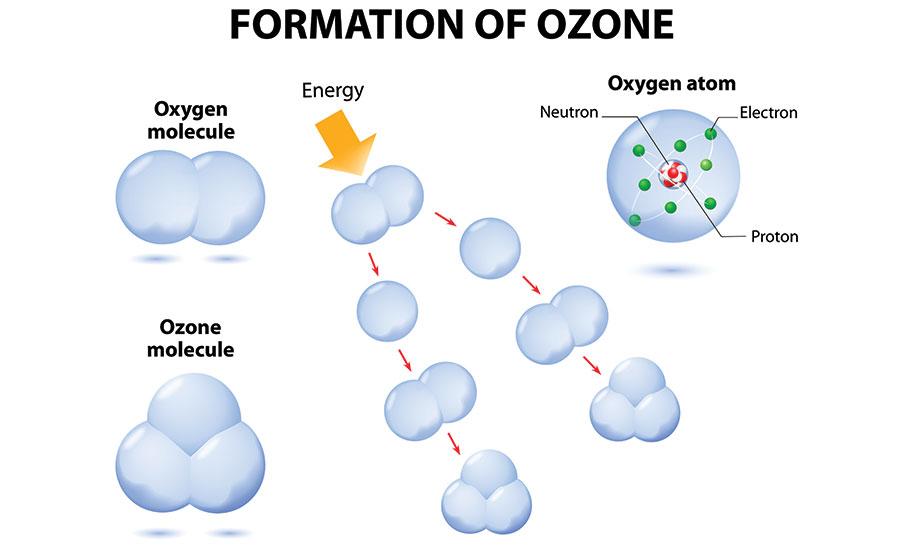 Ozone has existed on Earth for as long as oxygen has been here- about 500 million years. It has existed in our universe for billions of years. Wherever oxygen comes into contact with an electric arc, such as lightning and/or a particular wavelength of ultraviolet rays, like those from the sun around which the planet orbits, ozone will be created.

How is ozone generated?

This is why the air smells so fresh right after a lightning storm. Lightning is nature’s air purifier.

The ozone layer in the lower stratosphere is also generated by molecular fission and fusion, but by the sun’s short wave ultraviolet rays rather than by electricity. Coincidentally, it’s this ozone layer- created by short UV waves, that protects life on our planet from the longer UV waves within the spectrum.

Ozone generators manufacture ozone by applying either of these same two principles:

Ozone generators that utilize the electric arc method of generating ozone are referred to as corona discharge ozone generators. High voltage (2,000 volts and up) is passed through a dielectric material (material that transmits electrical force without conduction), while being fed and cooled by ambient air supplied by a fan located at the rear of the unit. Ambient air is made up of 78.08% nitrogen, 20.95% oxygen, .93% argon, the remaining .04% consisting of trace amounts of other gasses.

This sustained electric arc is what severs the O2 molecules, resulting in the manufacture of ozone.

Waves of ultraviolet (UV) light are what ‘slice’ O2 molecules in half in UV ozone generators. UV bulbs are mounted inside the generator which emit certain wavelengths of ultraviolet light which, in turn, separate the atoms of passing O2 molecules. This is how our sun creates and maintains the protective ozone layer between the troposphere and stratosphere.

UV is much less effective at generating ozone than corona discharge. Generators of this type typically have a much lower ozone output as a result.

How does ozone destroy odors?

Ozone reacts with odor molecules by transferring the “extra” oxygen atom of the ozone molecule to the odor molecule, changing its composition so it no longer has the same chemical makeup. This chemical reaction is called oxidation.

In a nutshell, through the oxidation process, what was formerly an odor-causing molecule is now an entirely different compound, and therefore does not possess the odor of its preceding form. A simple example of this molecular restructuring is the addition of an oxygen atom to a molecule of H2O to form H2O2 (which is the conversion of water to hydrogen peroxide).

To compare the difference between odor treatment using deodorizers and ozone, I often use the following analogy with my students. Pretend we have two foul-smelling odor molecules, and think of them as two bad guys. Let’s treat the first bad guy with a spray-on deodorizer. This can be represented by locking him in a jail cell so he can’t affect anybody or anything. He’s harmless, but “underneath it all”, he is still a bad guy. If the cell in which he is locked falls apart or wears out (or if his sentence time runs out), he is released and can again be an actively bad guy… or in our case, a stinky odor molecule.

Now let’s take the second bad guy and treat him with ozone. During the oxidation process, his very molecular structure is altered; he is no longer the same thing. This can be represented by waving a magic wand and “poof- he’s a rabbit!” Since the bad guy has been turned into something completely different/harmless, he can no longer be a bad guy- for he is now a rabbit, permanently, or in our case, a molecule without an unpleasant odor.

The most important thing to remember when generating ozone in a space is to evacuate the premises during the treatment. This includes the removal of pets, and in the case of high levels generated over a period of several hours, removal of houseplants is suggested. It’s a good idea to post “Do Not Enter- Ozone Area” (or similar message) signs on all entrances of a space as well.

After the treatment time is complete, either enough time should pass for the ozone to revert to oxygen (O2), or the space should be circulated with fresh air before people and animals are reintroduced.

Ozone has a relatively short half-life of approximately 30 minutes. For example, a half hour after the generator turns off, an ozone level of 10ppm (10 parts per million) will be 5ppm, and a half hour after that, it will be 2.5ppm, and so on. This quick degradation process is the result of the weak bond holding the third oxygen atom to the molecule.

There is a lot of conflicting information out there regarding how safe ozone use is in the restoration industry. While prolonged exposure even in light concentrations can be irritating to tissue, especially the lungs, using the proper precautions can help everyone avoid any side effects at all.

By way of comparison, carbon monoxide (CO) is considerably more dangerous, being responsible for 2,500 deaths annually, yet we think nothing of walking down the street in heavy traffic, alongside countless huge carbon monoxide generators (cars).

And here’s one of the most beautiful things about using ozone in the restoration industry- the only residue resulting from the generation of ozone is oxygen (O2).When used properly and a few simple rules are followed, ozone can be a safe and effective tool.